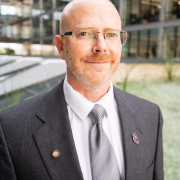 Dan Rush is a Ph.D. Candidate in the Building Energy and Environments program, Department of Civil, Architectural, and Environmental Engineering, at the University of Texas at Austin. He earned his B.S. in Mechanical/Aerospace Engineering and commission in the U.S. Air Force at Oklahoma State University in 1988. He completed Navigator and Electronic Warfare Officer training at Mather AFB, CA, in 1989 and flew worldwide operational reconnaissance missions as an RC-135 instructor and mission commander in combat, combat support, and sensitive operations from 1990 through 1999. He completed his M.S. in Manufacturing Systems Engineering at the University of Nebraska-Lincoln in 1998 and graduated from the USAF Test Pilot School in 2000 as an Experimental Flight Test Navigator. He served the remainder of his Air Force career in flight test, except for a seven-month deployment to southwest Asia in a diplomatic role. He retired from the Air Force in 2008, and then worked as a defense contractor flight test engineer for 12 years. He retired again in 2020, though he still consults part-time on flight test design. Not being very good at retiring, and still harboring a lifelong interest in energy efficient building design, he began the Ph.D. program at the University of Texas at Austin in fall 2020, and along the way completed his M.S.E. in Civil Engineering in December 2021. His interests include building energy efficiency and indoor environmental quality, and his research involves ceiling fans to aid in both thermal comfort and indoor air quality.